Kathy Bates Speaks Out About Her Lymphedema, And We Think More People Should

When actress Kathy Bates was originally diagnosed with ovarian cancer in 2003, her agent warned her not to tell anyone. “Even my gynecologist, whose husband worked in the business, warned that I shouldn’t come out with it because of the stigma in Hollywood,” she says. “So I was very careful.”

But keeping it a secret took a toll on Bates. So when the stage-II breast cancer diagnosis came in 2012, she decided she wasn’t going to be quiet about it. The result was added freedom and choices when it came to sharing her story, deciding on treatments, and picking out accessories like prostheses and wigs.

Bates has opted not to have her breasts reconstructed after her double mastectomy, and she only wears prostheses when she needs them for a role. In her real life, she doesn’t have to make believe that she’s anything other than herself. “I’ve joined the ranks of women who are going flat, as they say,” she says. “I don’t have breasts — so why do I have to pretend like I do? That stuff isn’t important. I’m just grateful to have been born at a time when the research made it possible for me to survive. I feel so incredibly lucky to be alive.” 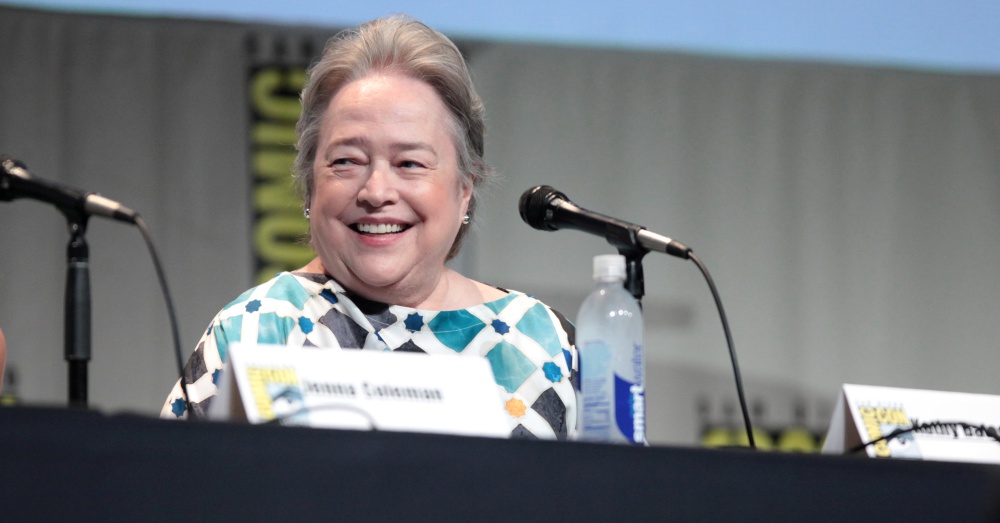 The most recent development in Bates’s battle is lymphedema, a little-known condition that affects mastectomy patients who have had lymph nodes removed or damaged in surgery. It can cause swelling in the appendages due to a lack of fluid drainage. Bates suffers from the condition, as did her mother, who had a more extensive surgery known as a radical mastectomy years earlier, after which she experienced swelling in her arms.

“She was always a very smart dresser and wore very nice clothes,” says Bates, “and after the surgery, she couldn’t fit into them anymore. It was a real slide into her feeling ‘less than.’ And so I remember getting hysterical when, even in the hospital, I noticed strange pains in my hands and then discovered that my arms were swelling.”

But she wasn’t about to let lymphedema stop her from living her life, and she wasn’t going to cover it up either. She’s now the spokesperson for the Lymphatic Education and Research Network and has shared her story on social media.

Bates’s “coming out” about lymphedema begs the question: Why aren’t more people talking about lymphedema? Roughly 10 million Americans suffer from lymphedema, and breast cancer survivors have about a 50% chance of developing the disease. This is not a rare occurrence, and yet so many of us haven’t even heard of it, while so many others who have it are afraid to talk about it.

Let’s not let stigma keep us from talking about the real problems in our lives. Discussion could be the first step toward better treatments for lymphedema, or perhaps a cure.

While there’s no way to get rid of lymphedema at this time, Bates says losing weight and going to physical therapy has helped. She also limits her salt and alcohol consumption and stays out of the heat.