The father-daughter dance is one of the most touching wedding moments. When Julie Norton got married, she didn’t want her parents, who were both born deaf, to feel left out because they couldn’t hear the songs. That’s why she decided to sign the lyrics to her father in a beautiful, unforgettable gesture of love. According to GoodNewsNetwork, both of Julie’s parents have been deaf since birth because of a rubella measles outbreak during the 1960s.

The Huffington Post reports that the song Julie chose for her father-daughter dance was “My Wish” by Rascal Flatts. Once the song started, a video screen showed Julie signing the song. She had been signing her entire life, and it was actually the first form of communication she learned, so signing the lyrics was easy for her. 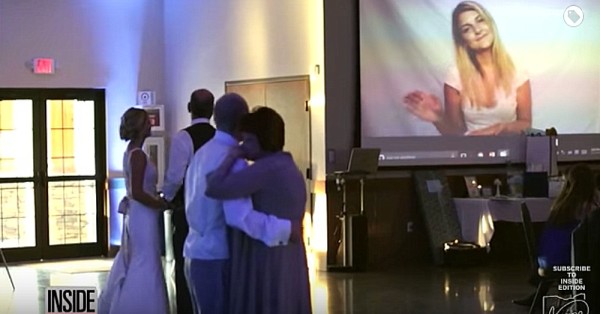 Her father, Scott Finkel, couldn’t have been prouder and happier at that moment. His dancing slowed down as he couldn’t take his eyes away from the video screen, and by the end of the song, he was in tears. He wasn’t the only one, as everyone else was also crying at what they just saw.

He gave his daughter a big hug to let her know how much he appreciated this surprise. That wasn’t all Julie did, though. To accommodate her parents, she also hired their favorite sign language interpreter and had signs put up specifically to help them. The result was a magical wedding day, for both Julie and her parents.

Dads and daughters at weddings: what can we say? Julie made sure her wedding day was just as amazing for her father as it was for her. For another father and daughter that stole the show, read about this father-daughter dance medley.