Everyone loves an underdog and seeing someone overcome the odds in the face of adversity. We simply love to celebrate people standing up to cancer and beating it.

The 12 women below are shown celebrating their last session of chemotherapy. Look closely at their smiles. Even though many of them still have a long road ahead, they are thankful for the support of family and friends, and their smiles show no trace of the ravaging effects that chemotherapy took on their bodies.

These 12 women serve as tremendous sources of inspiration. Celebrate with them and check out their photos on their last day of chemo.

Gina’s statement indicates she has a ways to go, but her smile tells you she’s got this beat. Gina displays a card from her loved ones while celebrating her 24th and final round of chemo. Gina started her four months of chemo two weeks after her diagnosis and shares that it was a long, hard journey, but she’s ready for the next step. 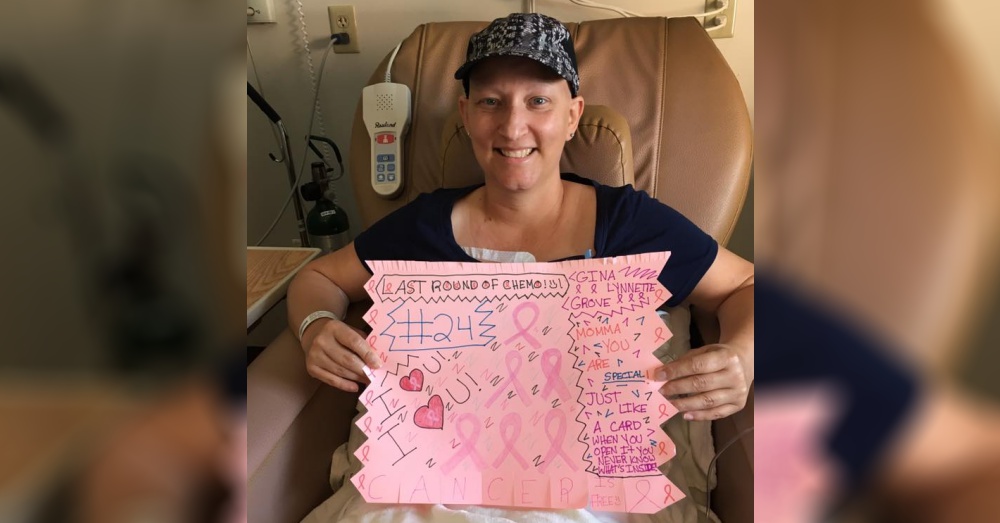 Nani Nieves celebrates her last day of chemo by sharing her philosophy with others in the same situation. “So to all who’s been diagnosed with Cancer staying positive is the only attitude! Cancer took my breast, my hair, eyelashes, eyebrows, my nails. But it’s not taking my life! I’m stronger and will fight like a warrior!” 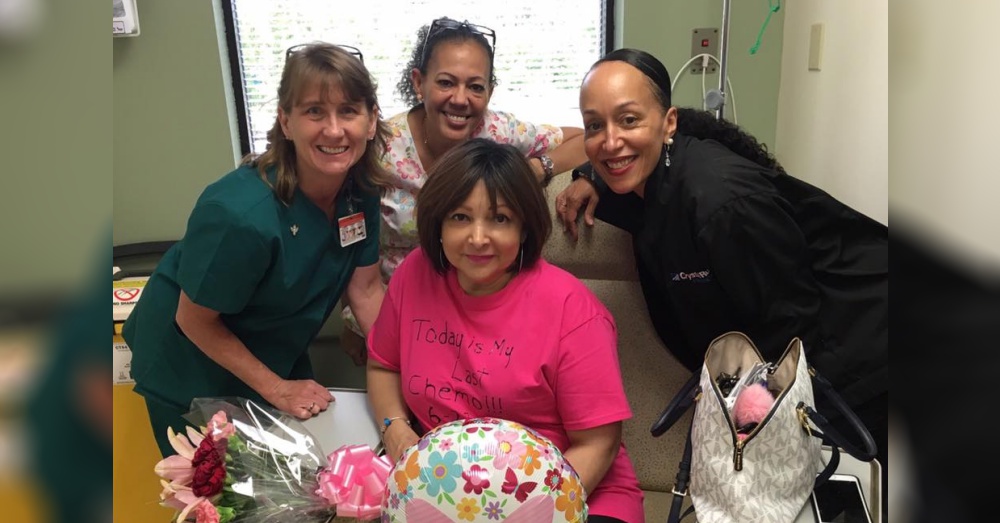 10. “Today is my last radiation treatment!”

Shari Bounty celebrates her last radiation treatment with a caregiver, a shoutout to Cancer Research Centers of America, and a card proclaiming her victory. 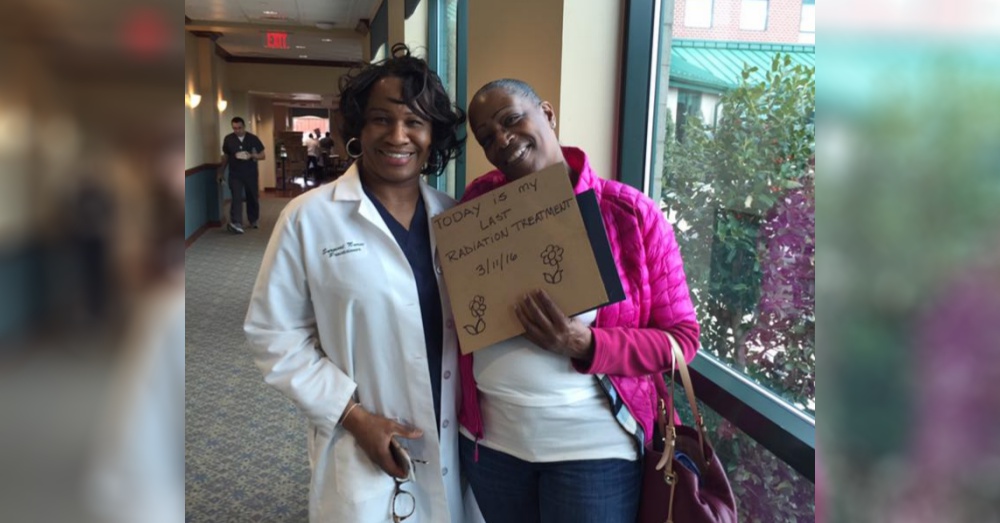 Cecy Gallegos celebrates her last day of treatment flanked by her three daughters and announcing that on June 15, 2016, she has been diagnosed as cancer-free. She also thanks her daughters for fighting with her every step of the way. 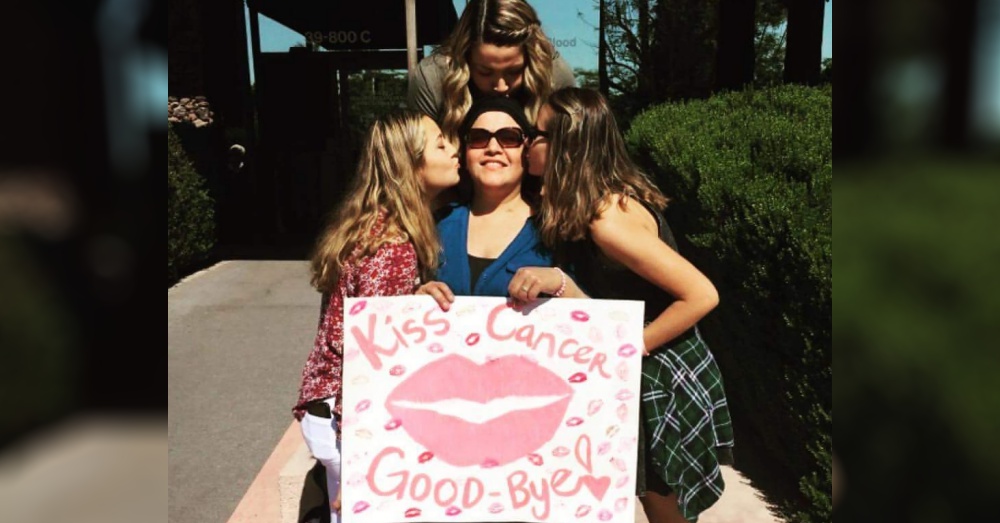 Amanda Kiel Hatton celebrates her last day of chemo with her three boys. She was diagnosed with stage 2B breast cancer at age 34 and underwent 16 rounds of chemotherapy. 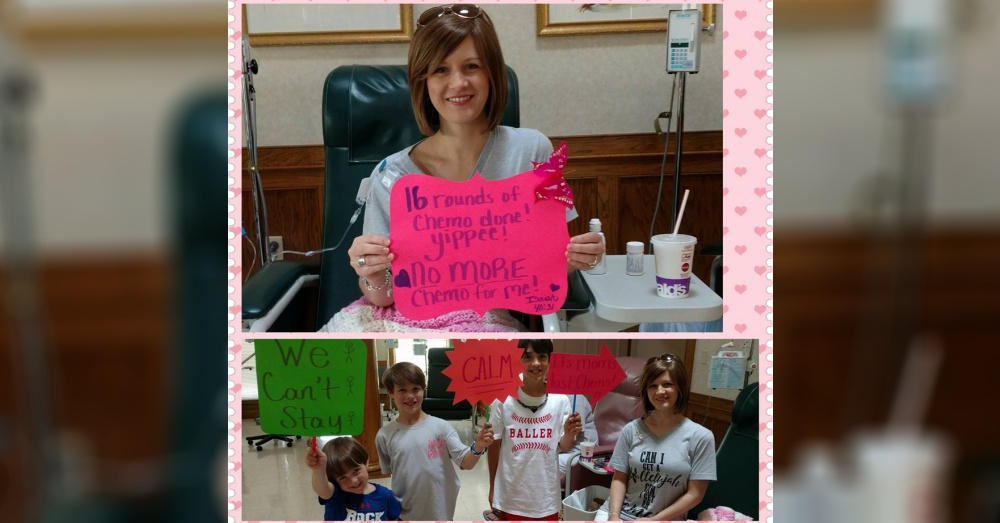 7. “Whatever is planned for me I know God is in control and I have nothing to fear!!”

Jamie Hayes was diagnosed with invasive ductile carcinoma in her right breast in January 2016, and in June her doctor told her “no more chemo.” She maintains a positive attitude and is thankful for the support of her family and friends while preparing for a possible lumpectomy or mastectomy. However, her face absolutely glows in this photo with her loved ones. 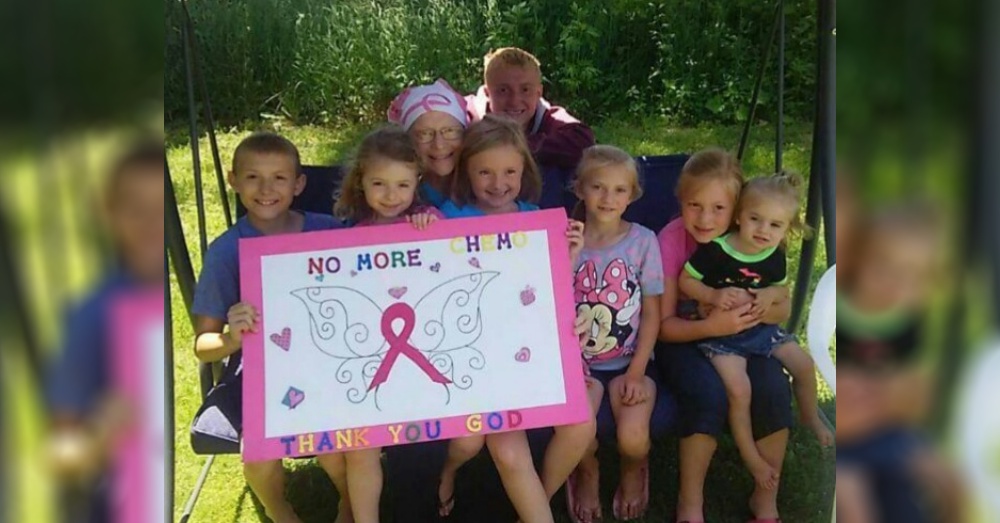 6. “We are so thankful to all the staff that have assisted her at the Gippsland Cancer Centre.”

Mandy Creighton describes her mother’s battle with bilateral, level 2, stage 3 breast cancer in October 2015. She had surgery to remove the lumps from both her right and left breast, the sentinel node from under her left arm, and all the nodes from under her right arm, including a tumor that was present in the right side. She started chemo in December 2016 and finished six months later. From the smile on her face, cancer doesn’t stand a chance. Her daughter helps her celebrate her last day of chemo by expressing her thanks to the physicians and staff at Gippsland Cancer Centre. 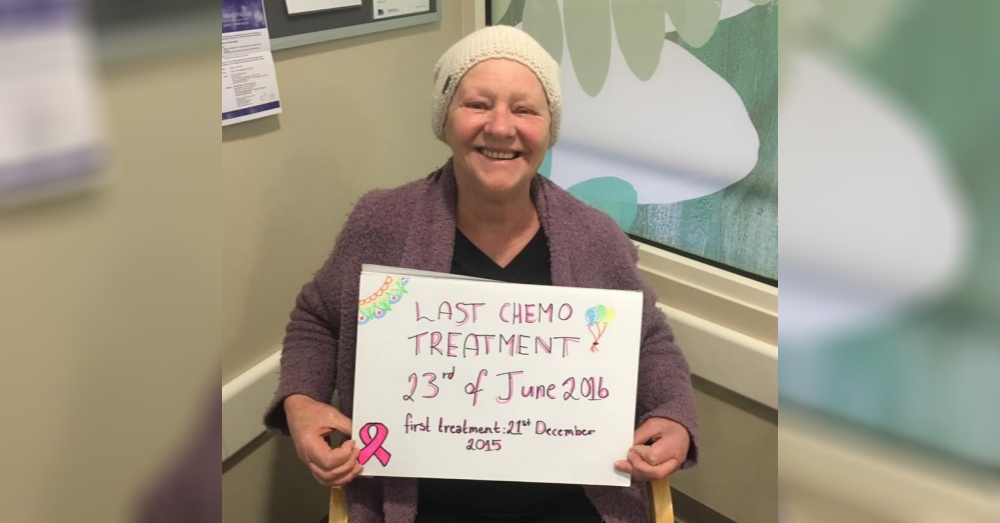 Katie Tarbill was diagnosed with an invasive form of breast cancer in February 2016 and finished her last round of chemo four months later. At just 35 years old, she underwent a double mastectomy in July 2016, with hopes for good reports from her physician. 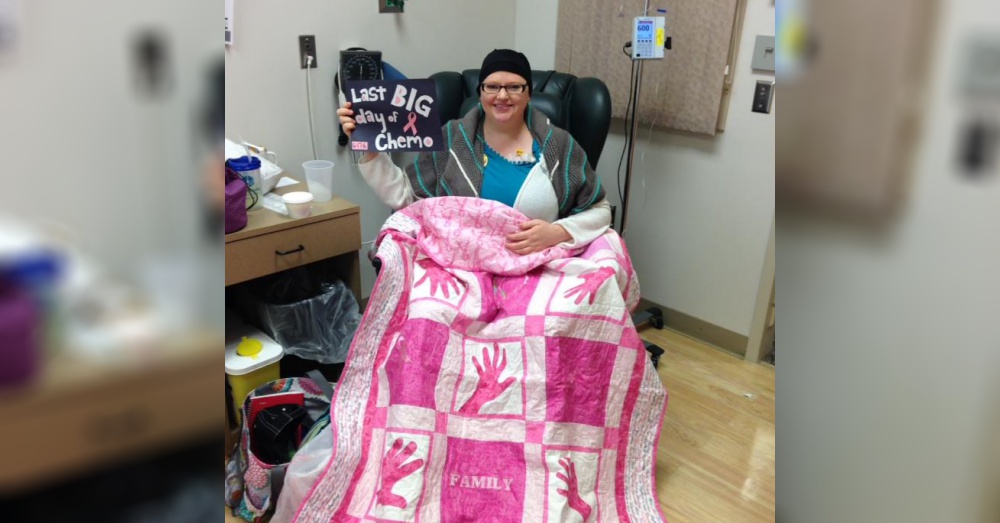 Monica Bernardi completed eight weeks of chemo before beginning surgery. In this photo on her last day of chemo, she looks ahead to the next phase of her life. Monica celebrates her victory with others like her who are fighting the same battle. 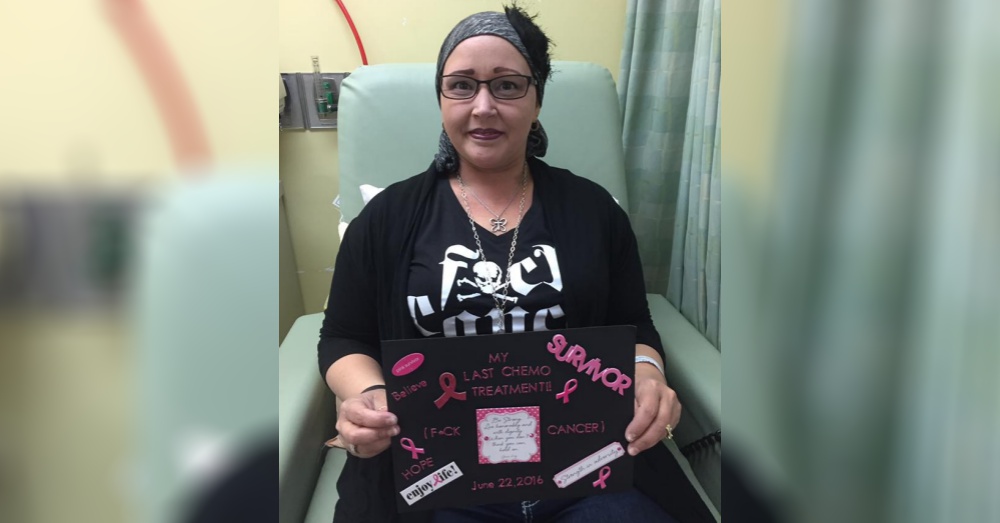 Heidi Bernazzini was diagnosed with stage 2B breast cancer in February 2016 and underwent four months of chemo, explaining that “2 weeks ago had an MRI and it showed complete response to the chemo..woohoo!” 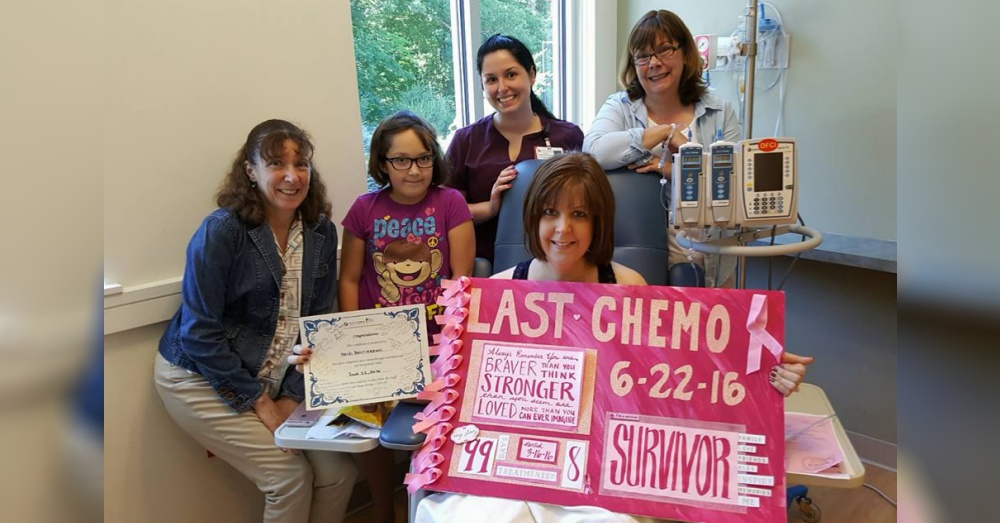 April Lee celebrates her last chemo treatment by sharing how she overcame the obstacle before her. Note the words on the card she’s holding: hope, faith, survivor. 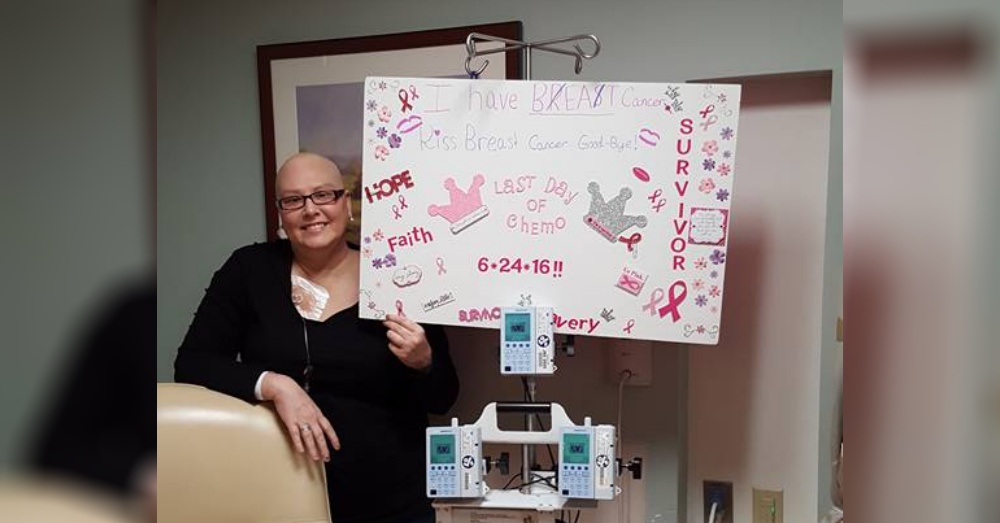 Laurie goes on to share, “After 17 months, one surgery, one nasty infection, 24+ chemo and infusions, and 30 radiation treatments, I’m done. I kicked cancer’s butt!” She goes on to thank her family, friends, and social media supporters for their strength and best wishes during her battle. 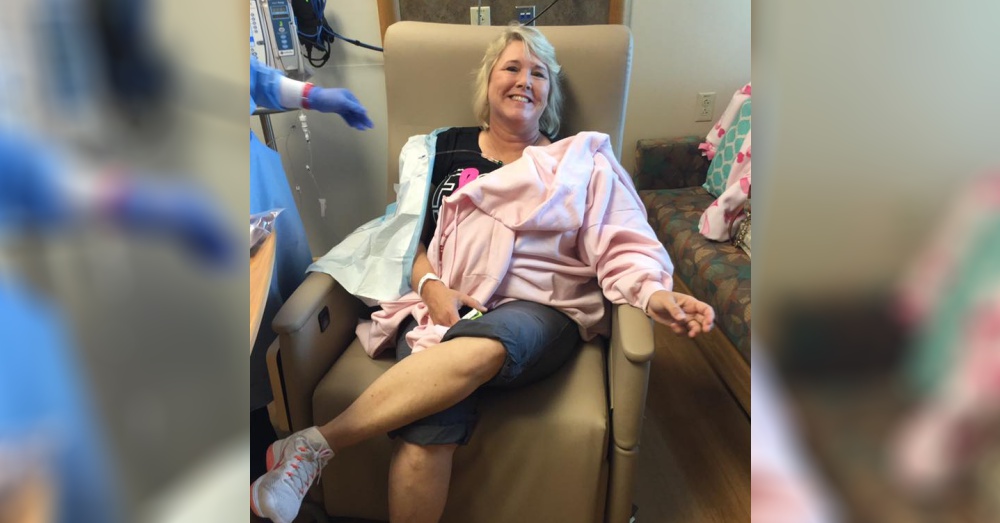 These women have fought a long, hard battle, and many of them still have a tough road ahead. But they all share an unyielding attitude and faith in their ability to stand up to the fight and win. One thing is certain — their smiles send a message of hope and inspiration to all.

16 survivors rocked the runway -- and empowered women everywhere: Click “Next” below!