Lynn Murphy, a homeless mother of four, was panhandling when Massachusetts State Trooper Luke Bonin drove by in his cruiser. When he came back a little later, Murphy already had an idea of what he was going to say, and she started to tell him she'd leave immediately. What Bonin said next surprised Murphy and inspired one passerby to take a picture recording the trooper's actions.

According to the GoodNewsNetwork, Bonin had just left court when he drove by Murphy's location on Davol Street and saw her holding a sign requesting help. He made a stop at a nearby restaurant for two takeout meals and then turned around and drove back. Murphy thought he had come to tell her she couldn't panhandle there, but Bonin told her that he wasn't there to kick her out. He then showed her both meals and asked her to pick the one that she wanted. 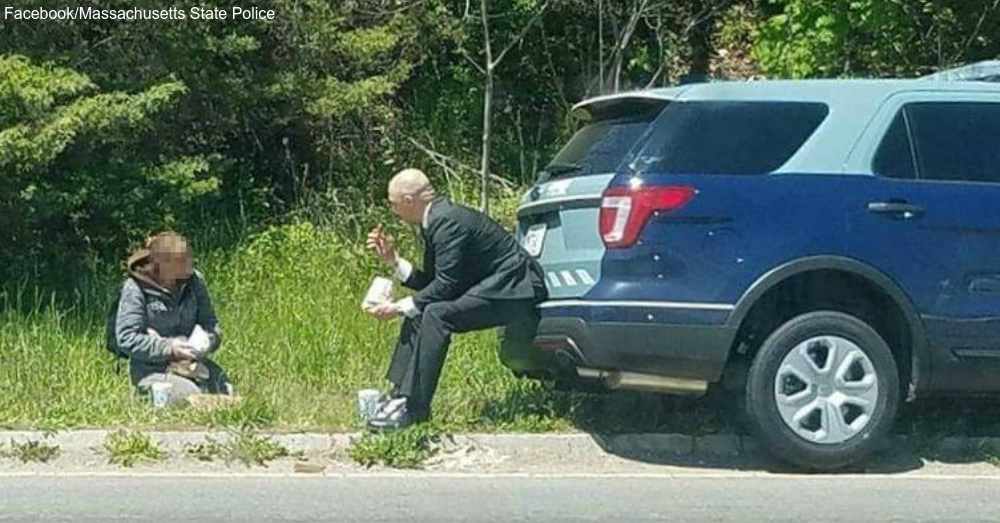 Murphy figured the trooper would just give her the meal and go, but she told CBS Boston that he then commented on what a beautiful day it was, and asked her to have a picnic with him. They went around to the back of the car and ate their meals together.

Bonin didn't do this good deed for publicity. In fact, he didn't even tell anyone else about it. However, one passerby named Jake Morse felt it was a moment that deserved recognition, so he took a picture and posted it to the Fall River Facebook group with a caption commending the trooper's chivalry. The Massachusetts State Police then posted the picture and story on their own Facebook page to let Bonin know how proud they were of his actions.

Bonin's heartwarming actions showed how one simple good deed can make another person's day. For another touching story, read about how one young father turned a random act of kindness at a restaurant into a teaching moment about compassion.