The next time you pick up a melon in the fruit section of the grocery store, you might want to touch it, thump it and give it a good feel a few times. That’s the message the Canadian Breast Cancer Foundation wanted to convey in November 2015 thanks to strategically placed stickers on certain fresh fruits. The charity partnered with Canadian grocery chain Nesters Market to produce an eye-popping awareness campaign for Don’t Forget to Check Week.

The awareness campaign was very simple. All it took was a round sticker surrounding the correct spot on a mini-watermelon, honeydew or cantaloupe, and the visual appeal usually reminds someone of a human breast, notes CBC News. When someone picks up the fruit, that person sees the verbiage printed on the sticker in the breast, uh, best way possible.

Meant as a reminder for women to self-examine their breasts once per month, the round sticker says, “Have you checked yours?” The sticker also directs women to a website that contains tips on prevention and breast cancer information, according to Ad Week. 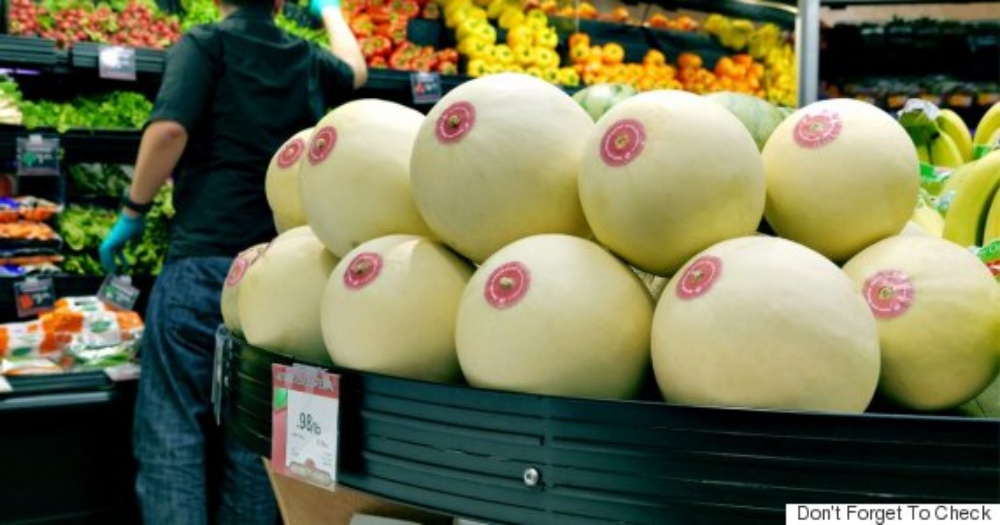 The people behind the stunt, which occurred over one week in British Columbia and Alberta, admit that the tactic may seem unconventional and even embarrassing to some people. However, the entire point of the breast-like melons with pasties is to grab people’s attention. Additionally, the aim is to educate women between the ages of 25 and 39, who may not otherwise think about breast cancer, about this disease. The Huffington Post says the campaign encourages women to give melons, and their own breasts, a little touch, look and care, or TLC.

The Don’t Forget to Check website also wants women to send “boob bombs” through a special app. The app automatically adds breasts to pictures and then shares them with family or friends. The idea may be unorthodox, but the goal is clear: to get the message out to as many people as possible. The Canadian Breast Cancer Foundation believes improved treatments and better awareness campaigns have led to a 44 percent reduction in breast cancer mortality rates since the peak in 1986. If this fruit-turned-breast campaign is successful, the organization may continue this push for awareness at a later date.

This fun way to raise awareness for breast cancer was very simple to implement, and one grocery store felt it was a great way to spread an important concept. With creative marketing ideas such as this, more and more awareness campaigns can take off in the future. For example, take a look at these fun-loving women getting down to the tune of Beyonce’s “Single Ladies” during their flash mob!