Landis Sims isn't your typical New York Yankees player. Only 10 years old and born without hands or lower legs, Sims has loved the sport of baseball since his grandmother got him his first bat when he was two. He dreamed of playing for the Yankees, and when he was eight he even got to meet one of his heroes, Derek Jeter. During spring training, the organization decided to make Sims' dream come true. Sims plays second base in Little League, with ESPN reporting that he wears prosthetics from the knees down and puts a soccer shinguard in his glove to play defense. When he's at bat, he uses another prosthetic to swing.

Sims' day at training camp started the same way it would for any free agent – he signed his one-day minor league contract. According to Today, Yankees pitcher CC Sabathia negotiated the deal for Sims and made sure his client got his own locker. After that, Sims got to hang out with another hero of his, Alex Rodriguez, who even signed a bat for him. 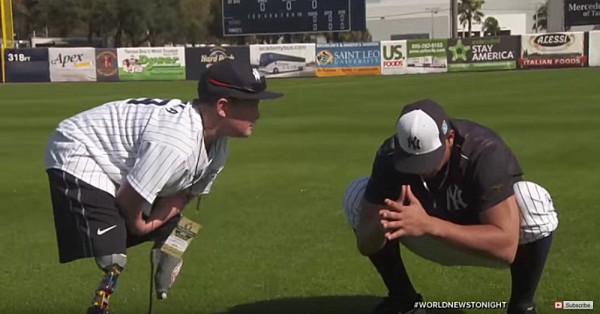 Sims had batting practice with Rodriguez, Mark Teixiera and several others, and he impressed the group with how well he hits. He even sent one ball flying right back to the pitcher.

Seeing the obstacles Sims has overcome was a source of inspiration for all the Yankees players. Rodriguez, in particular, was very impressed and spent most of the afternoon hanging out with the young ballplayer. Afterwards, he tweeted several pictures the two of them had taken together and called Sims “a true inspiration.” Often it's the sports stars who inspire the young kids, but in this case, it was the other way around, as Sims' dedication to baseball left the entire Yankees team in awe. Who inspires you? Please share!