Shannen Doherty battled cancer for two long years from 2015 to April of 2017, when she announced she was in remission. But she maintains that cancer stays with you even when it’s not physically in your body anymore.

In honor of her own cancer struggle and the many women who battle cancer every day, the former star of “Beverly Hills, 90210” and “Charmed” released a photo of herself from her cancer days that she had never shared with the world before.

The image shows Doherty crying as she holds chunks of her own hair in both hands. She had been utilizing a cold cap during chemotherapy treatments in an attempt to keep her hair, but to no avail. This photograph shows the utter devastation that can come with losing your hair, something many people mistakenly think is one of the easier parts of cancer. 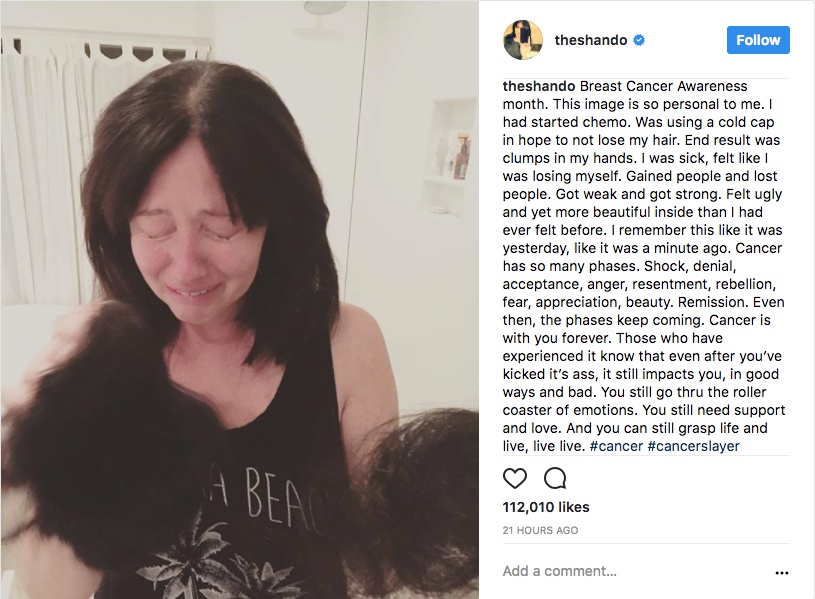 In reality, hair is a huge sign of femininity, a way to express a person’s personality, and something many people don’t realize they care so much about until it’s starting to fall out.

And it doesn’t come out prettily either. Most cancer patients end up shaving their heads rather than allow the hair to fall out in its own time, because chemo causes it to come out in big clumps, leaving uneven gaps.

Although it’s certainly one of the most poignant moments she’s shared on Instagram, this isn’t the first time Doherty has opened up about her cancer journey. Cancer patients and supporters around the world have praised Doherty for her openness about cancer. And now, even though she’s cancer-free, she’s still sharing her difficult experience on social media and reminding people with cancer that they’re not alone.

Thank you, Shannen, for your willingness to relive the experience for the purpose of awareness and support of those going through this painful process.