A rescued baby elephant has found his new crush and it isn’t another elephant.

Get ready for four perfect minutes of love, cuddles, and friendship when this baby elephant falls head over hooves for a human. He even tries to sit on his lap!

Who wouldn’t want a baby elephant to fall in love with them? 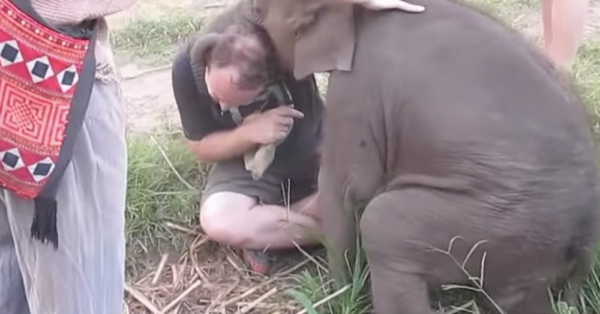 All animals deserve compassionate care, but is estimated that tens of millions of cats live on the streets of the United States. Sadly, many communities attempt to control their numbers through lethal methods such as catch and kill. Such methods are not only horribly cruel, they are also ineffective and costly. There is a better way.

Trap-Neuter-Return (TNR) is the humane alternative to euthanasia for managing and reducing homeless cat populations through sterilization. TNR begins with the trapping of cats using humane cage traps. The cats are then taken (in the trap) to be sterilized and vaccinated against rabies, distemper, and other diseases. Finally, the cats are “ear tipped” so they can be easily identified as sterilized. Following surgery, the cat is returned to the trap and allowed to recover, then released to the site of capture to live out its natural life while being cared for by community volunteers.

The Animal Rescue Site is offering a chance to help these animals. Click this link to learn how you can help stray cats everywhere!

In the meantime, watch the adorable elephant action below!

Julie Hunt Julie resides in Northern New Jersey with her two kids, two dogs, cat and partner. She has two published books which make excellent trivets if you aren't a fan of poetry. She tolerates people but LOVES animals. If she isn't blogging, she's most likely cuddling with her pups, Paisley and Skyler.
Proper greatergood_ctg_belowcontent
Proper BCS greatergood_ctg_footboard