We’ve all gotten headaches before. Sometimes they’re due to dehydration or a change in the weather, and they can be eased by drinking lots of water, taking a steamy shower, or resting in a cool dark room. Sometimes, they’re due to stress, or tension, or staring at your screen too long, and medication is the only thing that can relieve the pain.

And sometimes — freakishly — a headache is caused by a spider living in your ear and can only be cured by luring the spider out.

(Please excuse me while I run around the room screaming and violently shaking out my clothes and hair to dislodge any potential arachnid squatters on my person.)

A woman from India named Lekshmi is the unfortunate harborer of the spider in this story. She loved napping outside on her veranda.

Who doesn’t love a nice midday snooze in the sunshine? 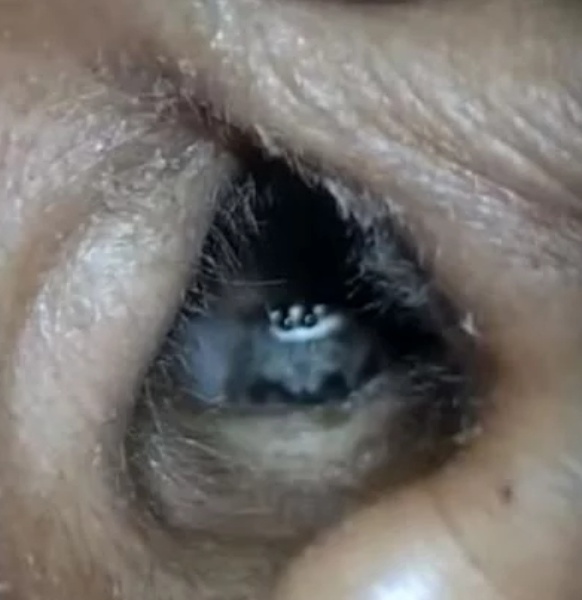 But one day, she got a terrible headache that just wouldn’t go away. It was so severe that she went to the hospital to see if they could determine the cause.

When the doctors inspected her ears, they found a tiny spider tucked away in her ear canal.

He was responsible for her splitting headache.

Dr. Santosh Shivaswamy, an ENT consultant and Lekshmi’s doctor, was shocked. While getting something lodged in your ear isn’t atypical, he’d never found a spider before.

Somehow, Lekshmi held it together while they coaxed the miniature arachnid out.

“I was terrified as I could feel [the] movement of a creature in my ear. The acute ear ache followed by sharp pains suffocated me,” Lekshmi recalled.

“I couldn’t think of anything and was petrified when the doctor confirmed [the] presence of a spider in my ear.”

We completely understand, Lekshmi! That’s a situation no one wants to be in.

You can see the spider crawl out of her ear in the video below. Look, I hate spiders, and this is beyond creepy and horrifying, but also… the spider is kinda cute. Right? Am I crazy for thinking that?

I wonder if she still takes naps on her veranda.