Kaleigh Miller is a three-year-old girl who was enjoying some time outdoors with her mother, Sabrina. They ate some limes and then she played in the sun. It wasn’t long before her face started turning red and she had blisters forming. Sabrina, her mother, didn’t know what was happening and she started to panic.

The blisters continued to get worse.

The reason why she was experiencing this was due to phytophotodertmititis, a condition that is known as ‘margarita burn.’ It occured due to a chemical reaction from the citrus in the lime being exposed to sunlight.

Citrus and other foods can also trigger the issue, including celery, parsley, lemon and fennel.

“She would look at herself in the mirror and say, ‘Why is this happening to me?’ I was just kind of traumatized. I was, like, crying my eyes out, ‘What’s going on with her?’” said her mother Sabrina.

Fortunately, the burns didn’t leave any permanent scars and she has since healed completely.

The three-year-old girl also kept her smile, but knew that she was going to follow a new rule from now on.

“I can’t play with limes in the sunshine,” the little girl said.

Limes are often used in a variety of foods and refreshing drinks.

To pharmacy technician Elinda Xavier, however, the experience was quite different.

Xavier started noticing a burning sensation on her hands after making margaritas in the sun. Second-degree burns and blisters started appearing soon thereafter. 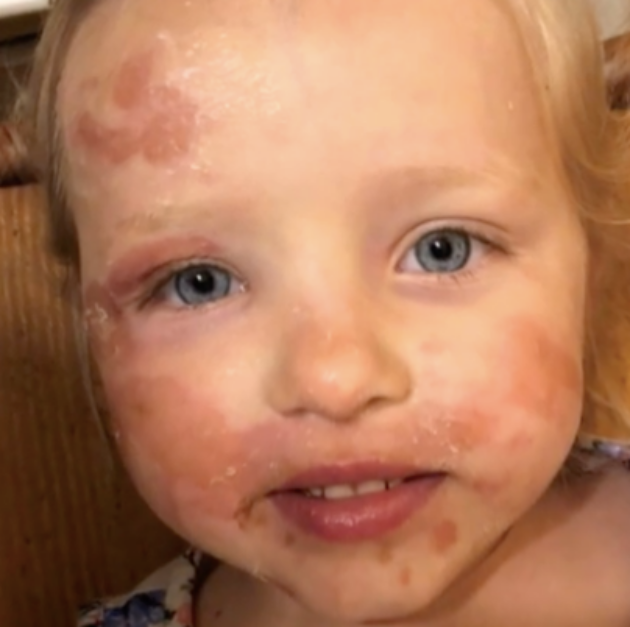 An ingredient in limes makes them photosensitizers when they are exposed to sunlight. The chemical reaction leads to the burn. Furocoumarin is the name of the chemical.

“I am shocked that this is even a thing.”

Xavier started documenting the burns on social media to let other people know about the issue.

“Then Facebook censored my posts because they were so horrific.”

It was difficult to handle the pain.

“If you’ve ever scalded your hand under hot water, or steam, or anything like that. That’s what it was like, except for a constant,” said Xavier.

In a margarita burn, the affected area begins to get red followed by itching and burning and then blistering. Tylenol is typically used to treat less severe cases, along with hydrocortisone cream and cool compresses. It is similar to treating poison ivy or another type of rash.

It may be necessary to go to the doctor if it is more severe.

“They were amazing, I will not do it again though, I think I’ve learned my lesson,” said Xavier when asked how the margaritas were.

Fortunately, both of these individuals are doing much better.