A lot of us take it for granted that we can go out in public without drawing loads of attention to ourselves. We can get in our cars or on public transit, head out to run errands or go to special events, and blend right in with the crowd. We don’t have to worry about cruel remarks, or blatant stares.

But for some people, even brief treks out in public can be painful and difficult. When a condition affects a person’s physical appearance, it can quickly make them want to stay at home, away from prying eyes and judgement. It’s just easier.

Libby Huffer is someone whose physical appearance has made it difficult for her to go out in public her whole life. She was was born with a genetic disorder called neurofibromatosis type 1. It causes hard, non-cancerous tumors all over the body.

When she was in school, Huffer was dubbed as a “toad” by her classmates, and was no stranger to bullying. 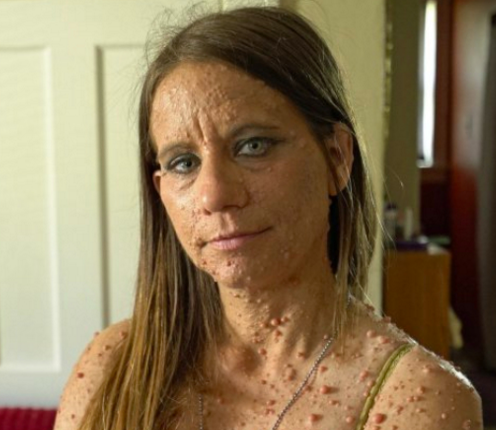 “I can’t even go for groceries without someone saying, ‘What’s that all over you?’ or pointing at me with their kids saying, ‘Look at her,’” she said. “Someday, it would be wonderful not to have to worry about how I look, or what clothes will hide my bumps.”

Huffer has had more than ten surgeries throughout her life to try to remove the tumors. They are more than just a nuisance — they’re actually painful to her. But none of the surgeries have ever really helped her.

Until Huffer went on The Doctors, that is.

Surgeons on the TV show gifted her free surgery to help remove the tumors. After multiple sessions, the tumors were finally eradicated.

She looks absolutely amazing. And best of all, now Huffer can hug her daughter without feeling any pain.

Take a look at the video below to see her transformation.