Hayley Kalinins was diagnosed with breast cancer in 2011 at the age of 30. The cancer had already metastasized to her liver and lungs, and doctors gave the young mother only eight months to live.

Kalinins had four children, and at the time, her youngest was only 18 weeks old.

Her family was stunned. They weren’t ready to lose her, not by a long shot. Eight months wasn’t enough time, for her, or for any of them.

In the end, she made it over seven years.

Beside her through it all was her husband, Andrew, and her four children. Andrew is a well-known fitness coach in the UK for the soccer team Sheffield Wednesday.

The couple renewed their vows 10 weeks after her diagnosis. Kalinins was undergoing chemo that made her hair fall out, and walked down the aisle bald.

She was so beautiful.

She underwent 70 rounds of chemotherapy, trying different cocktail combinations over the years, and had surgery to remove the cancer. But in 2016, her doctors told her they had no more new treatment options for her to try — and sent her home.

“To be told by a doctor that there is nothing else, nobody can ever explain what that feels like,” Hayley said in a video. “To get those words that there’s nothing they can do for you, that was really hard, really, really hard.”

After reviewing their options, they decided she would head to Germany for additional treatment, where the Hallwang Clinic, one of the best clinics in the world, is located that offers both integrated medicine and alternative treatments. She would undergo immune-boosting infusions, a new immunotherapy treatment, and a new type of chemotherapy in the form of a tablet.

In order to get the treatment, Kalinins and her family had to raise hundreds of thousands of dollars. They put on a variety of fundraisers and started a GoFundMe page.

They succeeded in raising £235,000. The treatment gave her two more strong years. 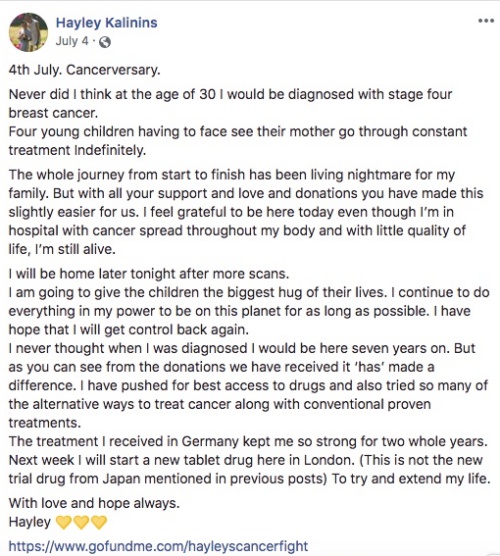 “The whole journey from start to finish has been living nightmare for my family,” she wrote. “But with all your support and love and donations you have made this slightly easier for us. I feel grateful to be here today even though I’m in hospital with cancer spread throughout my body and with little quality of life, I’m still alive.”

“I will be home later tonight after more scans. I am going to give the children the biggest hug of their lives. I continue to do everything in my power to be on this planet for as long as possible. I have hope that I will get control back again.”

“I never thought when I was diagnosed I would be here seven years on. But as you can see from the donations we have received it ‘has’ made a difference. I have pushed for best access to drugs and also tried so many of the alternative ways to treat cancer along with conventional proven treatments.”

In the spring of 2018, Hayley’s condition rapidly deteriorated.

On July 18th, Hayley posted that the pain had been incredibly difficult over the summer, and that she had lost the use of her right hand and arm. It was getting more difficult to look after the kids on summer break, and so Andrew stopped working to be with her. The fatigue was incredible.

On September 17th, two days before she passed away, her husband posted a picture she had taken of herself and wrote that she was doing very poorly and that he felt helpless.

Then, starting on the morning of the 18th, Andrew began posting brief, frantic updates to the Hayleys Cancer Fight page and his personal page.

“Hayley needs our prayers. With everyone willing her to live. Come on Hayley. Xx.”

“Miracle where are you. xx.”

“As I left Hayley tonight. She whispered I love you. That will remain in my heart forever. Xx.”

“My friends, all of you are helping my family to get through this. We are in a storm. I can not thank you enough. Best wishes Andy xx.”

Our hearts go out to the Kalinins family and their loved ones.