Heather Lindsay and her boyfriend, David Mosher, were happy and in love in 2016. The couple had met at a swing dancing class in May of 2015, and David had plans to propose on December 23rd, 2016, when the couple got some horrific news.

On the morning of the day the proposal was supposed to take place, Heather was diagnosed with aggressive triple-negative breast cancer that had spread to her lymph nodes. But that didn’t scare David off. He knew he still wanted to be with Heather, through thick and thin.

“I left the plans as they were. I proposed to her,” David said. “We had the toughest year of our life. She struggled with her cancer through the traditional chemotherapy.”

Thinking the cancer was under control, Heather and David made plans to get married on December 30th, 2017. But in September of that year, they received the terrible news that the cancer had spread to Heather’s lungs and brain and would be terminal.

As the days wore on and Heather’s condition worsened, the couple began to realize that she may not live to see their wedding day. So they moved it up to December 22nd and had a beautiful wedding ceremony in St. Francis Hospital in Hartford, where Heather was receiving palliative care. 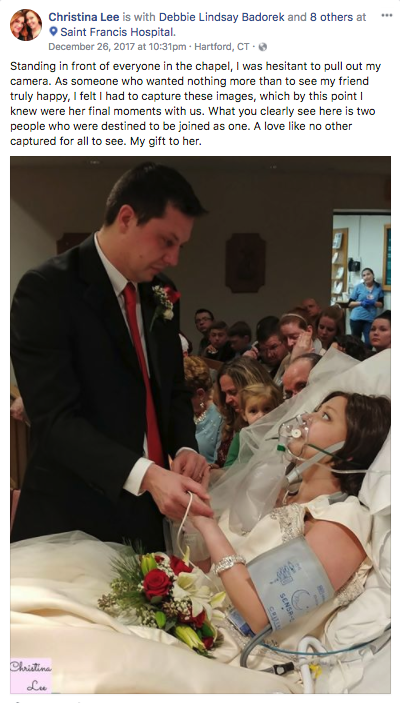 Hospital staff wheeled Heather’s hospital bed down to the chapel, where the couple were wed, Heather hooked up to various tubes and wires but nonetheless wearing her lovely wedding gown and smiling up a storm.

Heather’s last words were her vows, which were incredibly difficult for her to say as she struggled to breathe. Following the wedding, she raised her arms in one last gesture of triumph; she had managed to marry the love of her life before cancer could take her. 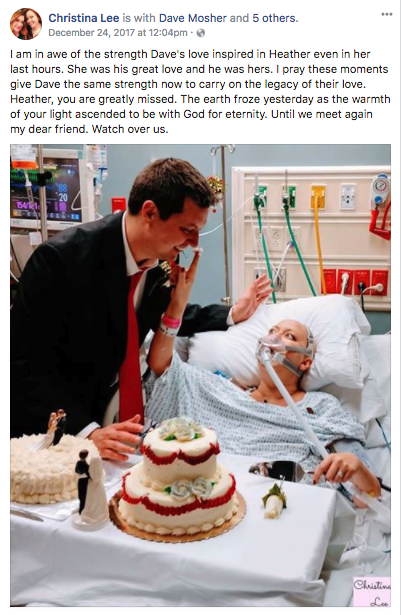 Bridesmaid Christina Lee caught the whole heartwarming and tearful event on camera. Initially reluctant to pull out her camera, she soon realized how important it would be to capture those moments.

“I am in awe of the strength Dave’s love inspired in Heather even in her last hours. She was his great love, and he was hers,” said Christina. “What you clearly see here is two people who were destined to be joined as one. A love like no other captured for all to see. My gift to her.”

Just 18 short hours after the couple said their vows, Heather passed away at the age of 31. Even in their grief, her friends and family continue to draw courage from her story of courage and strength. 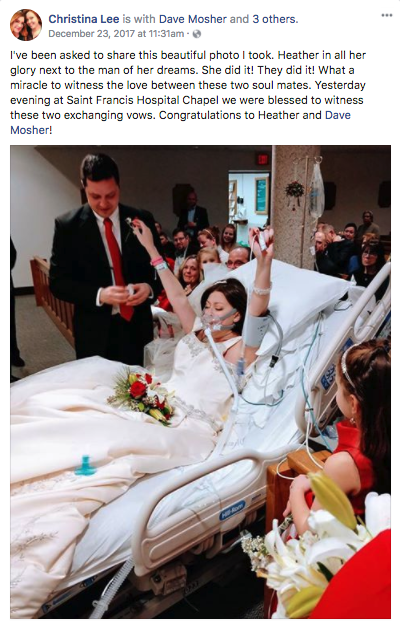 Watch the video below to hear more from David about his late wife’s brave struggle and the beautiful celebration of love they were able to share with their friends and family before her passing.

McDonald’s Customer Buys Breakfast For Mom And Soldier Son, Unaware Of Their Heartbreaking Meal: Click “Next” below!