When someone is going through a tough time they love talking to someone who understands them and can empathize. It helps them feel supported and forms a bond and a sense of community.

But 19-year-old Eric Erdman never had that kind of bond when he was growing up as a victim of bullying and child abuse. So he decided to make it his life’s mission to help kids like him find their voice and speak up.

Eric was born 25 weeks premature weighing only 2lbs. Though Eric eventually caught up to his peers, preemies tend to have various health issues throughout life. And unfortunately that was the case for Eric, who at 16-years-old found out he had brain cancer.

Despite multiple surgeries, rounds of chemo, and all the determination in the world, Eric’s cancer is relentless and he’s been categorized as having stage 4 anaplastic ependymoma. In July of 2019, he was told he had a total of 19 tumors in his brain and was given only 6 months to live. 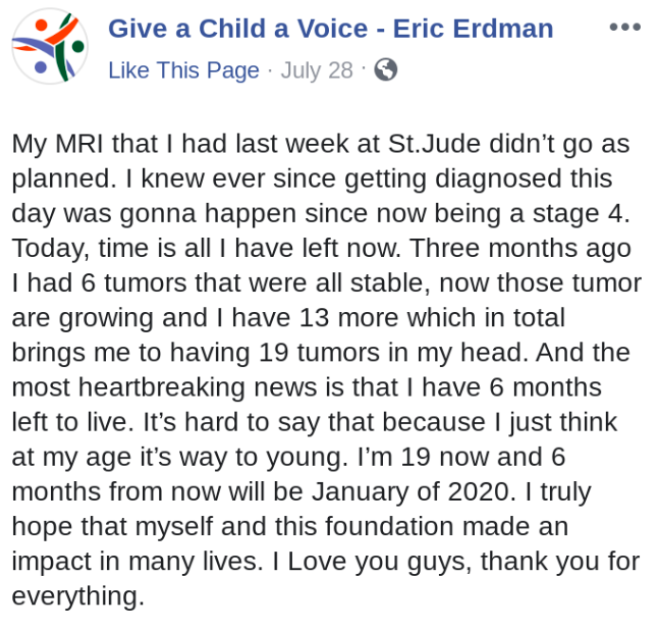 But Eric refuses to just sit around. He continues to work tirelessly for his nonprofit organization, Give a Child a Voice. Eric was inspired by the kindness shown to him during his diagnosis and decided to establish the foundation in 2017 to help “kids who experience difficult situations receive the same kindness he received at one of the most vulnerable times of his life”. He uses his own voice to speak up for kids who may be too scared or shy to do it for themselves.

As his time dwindles, Eric hopes the resources and foundation he’s put into place helps other kids find their own voices. Despite his health, he continues to work for his foundation, and even allows other kids to come to him personally to share their story and does his best to help them in their circumstances.

For him it goes beyond just just raising awareness, though. When the Make A Wish foundation reached out for his wish, Eric chose not to get anything for himself. Instead he asked to have two new gyms built (one at his high school and another at a rival school) because the gym was the one place he felt like he could go when he “needed an out” during tough times.

In his short life, Eric has done a tremendous amount of good. He’s used whatever power he has to promote kindness and strength for the people who need it most. While it’s far too soon for the world to lose him, his legacy is one that will help change the world.