Julia Louis-Dreyfus Talks About The Side Effects of Chemotherapy

Julia Louis-Dreyfus was diagnosed with breast cancer in September of 2017, the day after she won an Emmy for HBO’s Veep. She plays the star role in the show and also acts as an executive producer.

She kept a fairly low profile about her experience with the disease, occasionally referencing her treatment on her Instagram page while continuing to work on her award-winning show.

Now the Seinfeld alum is opening up about chemo’s not-so-fun side effects, and how Veep kept her going.

She announced her diagnosis on September 28, 2017, with a simple statement on Instagram. 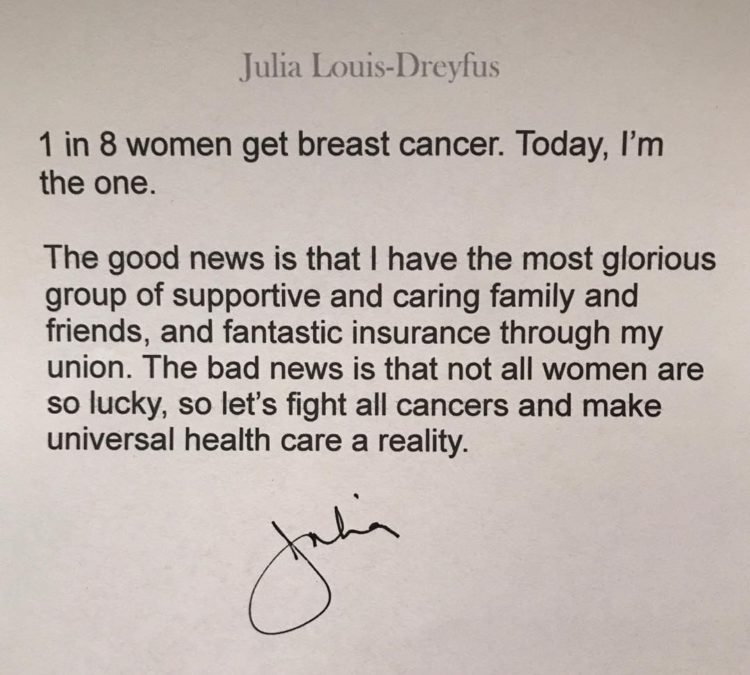 Louis-Dreyfus then underwent six rounds of chemotherapy, each three weeks apart. After every session she began to feel the side effects more and more.

“The effects of chemotherapy are cumulative,” she told Net-a-Porter. “So I definitely felt that more towards the end, but going to work was a very joyful distraction, and I was so pleased to have the strength to do it.” 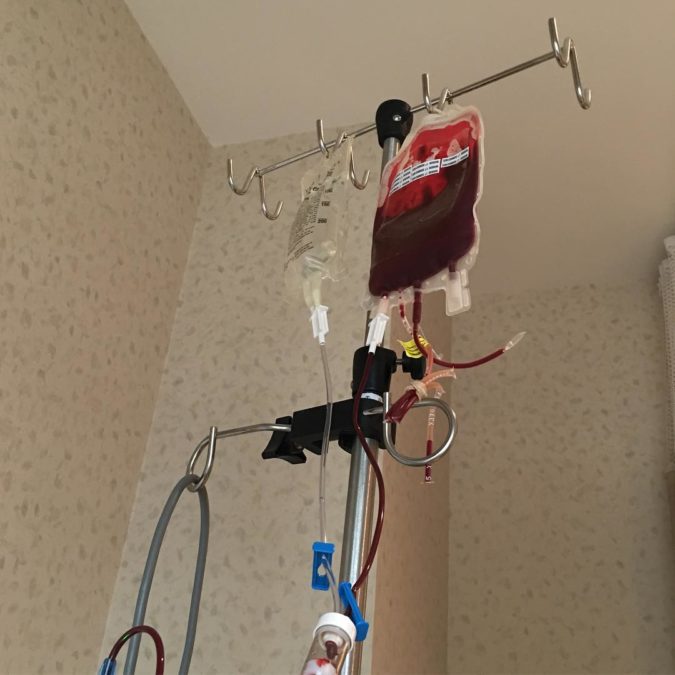 The actress experienced the unpleasant hallmarks of chemo — nausea, vomiting, and diarrhea — and also developed sores on her face and inside her mouth.

She posted the image below after her second round of chemo, saying, “Chemo #2: finito. We are NOT fucking around here. “I’ve got the eye of the tiger. The Fighter dancing through the fire cuz I am a champion and your’re going to hear me ROAR.” Thanks to @mrtonyhale & @timothycsimons & @katyperry for their hilarious and loving inspiration.” 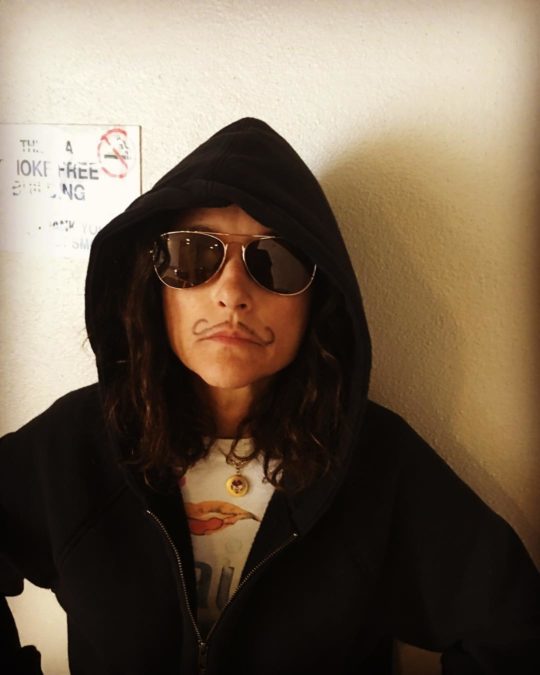 She credits her work on Veep for keeping her moving forward. While the hit show wasn’t shooting, the cast was doing table reads. Continuing to work was a huge help to her.

“If I hadn’t had a show that was relying on me, I don’t know that I would have gone so public with it,” Louis-Dreyfus told Net-a-Porter. “But I had 200 people waiting to go back to work. And I wanted to talk about it in a way that could maybe highlight something important.

“Universal healthcare was an important issue to me prior to getting this diagnosis, and it certainly is even more so now.” 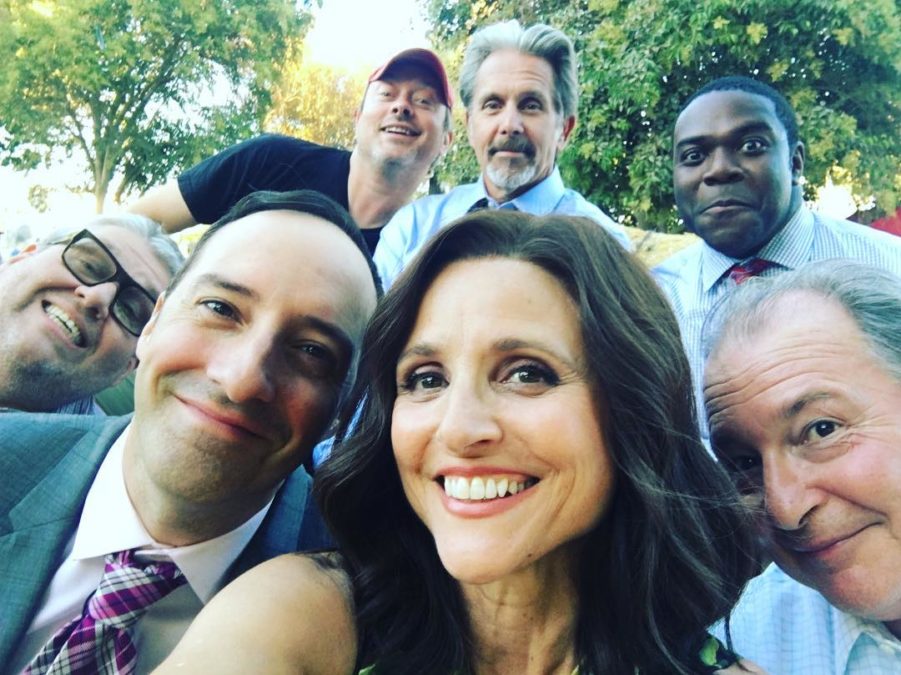 She worried about the dreaded “chemo brain,” and tried to keep her brain sharp.

“I was very worried about would I have the brain power to get back to the hard work [of shooting],” she told Net-a-Porter. “I have to memorize a lot and I was concerned about whether I’d be able to do that.

“I started doing tricks, trying to memorize poems and things – I think it was mainly just comforting to me to get them in my head.” 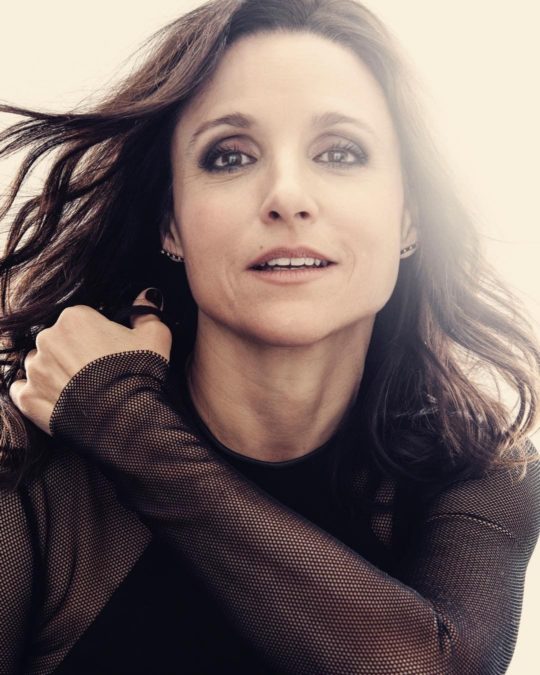 Shortly after she wrapped up treatment, she posted the photo above, saying, “Verified
Hoorah! Great doctors, great results, feeling happy and ready to rock after surgery. Hey cancer, “Fuck you!” Here’s my first post-op photo.”

Veep is in its final season, so now Louis-Dreyfus is shifting her focus to developing new projects.