She had been waving to the students walking to school for the last 12 years. 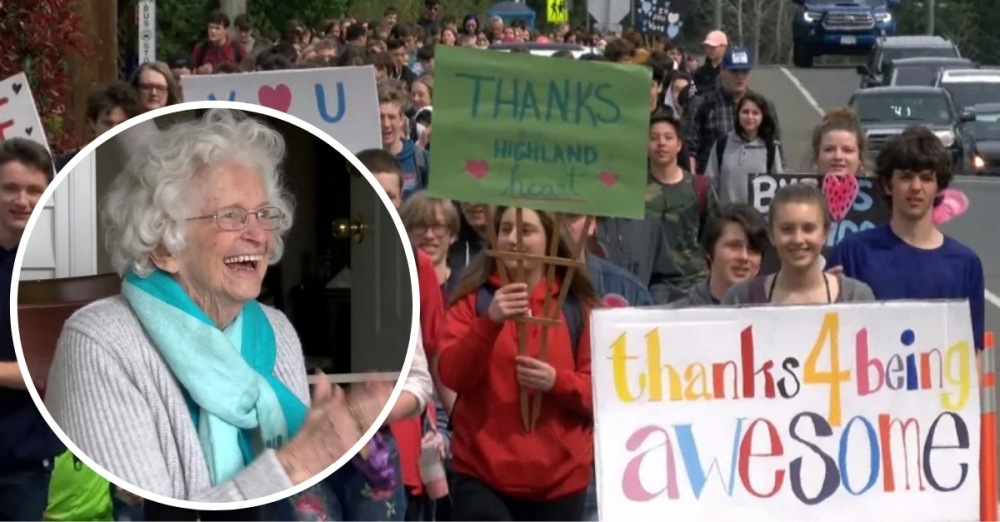 An 88-year-old woman named Tinney Davidson from Comox, British Columbia has had a tradition of waving to the students who walk by her house for the last 12 years. While the students were on their way to school, Tinney and her husband would wave to the kids and eventually, they would start waving back. Tinney didn’t stop after her husband passed away.

The students heard that Tinney would soon be moving away into an assisted living home and decided that Tinney deserved a loving farewell from them.

“I just liked the look of the children,” she said to CBC News back in 2014, “They all looked in and I thought, ‘If they’re looking in, I’ll wave to them,’ and that’s how it started.”

After this beautiful tradition had started and lasted so long, over 400 students gathered around with signs and flowers for Tinney, along with a final wave “goodbye” before she moves into her new home. “I was shocked again that there are so many kids that want to say goodbye to me,” she said, which was captured on video.

Back in 2014, Highland Secondary School actually held an assembly honoring Tinney for all she’s done for the school’s community. In 2016, 70 students from the school brought her cookies and Valentine’s Day cards. They were all so close!

“I was just enthused by them. They’re just wonderful children. They just make me feel so good,” she said back in 2014, “You know, it’s just, ‘Love you, you’re wonderful, you’re amazing,’ love and kisses and everything else.”

“Well, I think I’m just the luckiest lady alive, really and truly. I have so much joy from them,” Tinney added.

You need to see the video! It is absolutely heartwarming. Be sure to SHARE this article if you loved this story.

WATCH the full video below of the 400 students waving their final “goodbye” to Tinney Davidson: