Assistant Fire Chief Kim Strickland, like her father before her, puts others first on a daily basis. It’s her job to get people to safety on their worst days, and she does it with the support of her fellow firefighters at Broadway Fire Station in Anderson County, South Carolina.

Kim’s seen a lot in her 20 years as a firefighter. So when she found a cyst near her right breast, she wasn’t concerned. She sought medical advice and decided to have more tests done in six months.

But when she found a lump on her left breast, she knew she couldn’t wait that long. 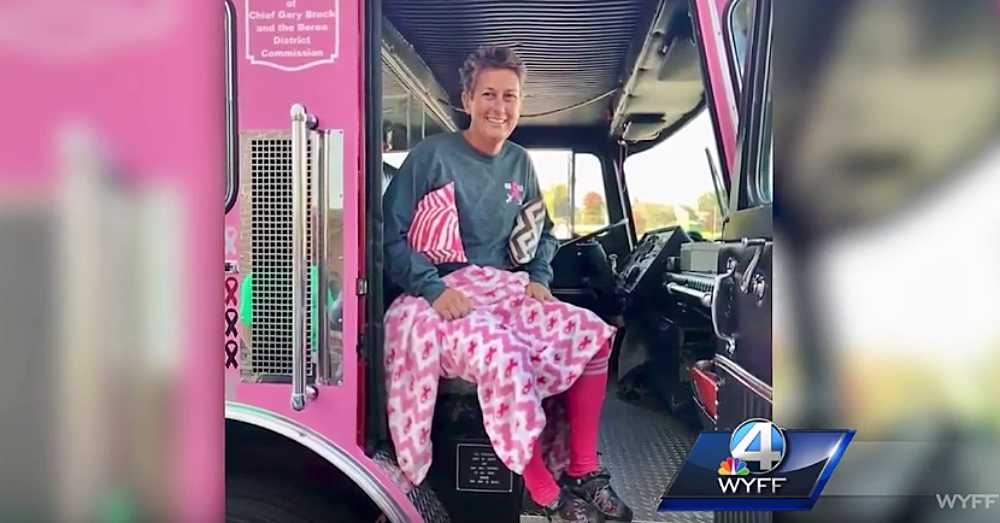 Tests revealed that Kim had bilateral breast cancer, and she was soon scheduled for a double mastectomy. Kim was not happy about having to miss work after surgery. Doctors advised her to stay at home for 6 weeks, but Kim’s convinced she’ll be back to work sooner. 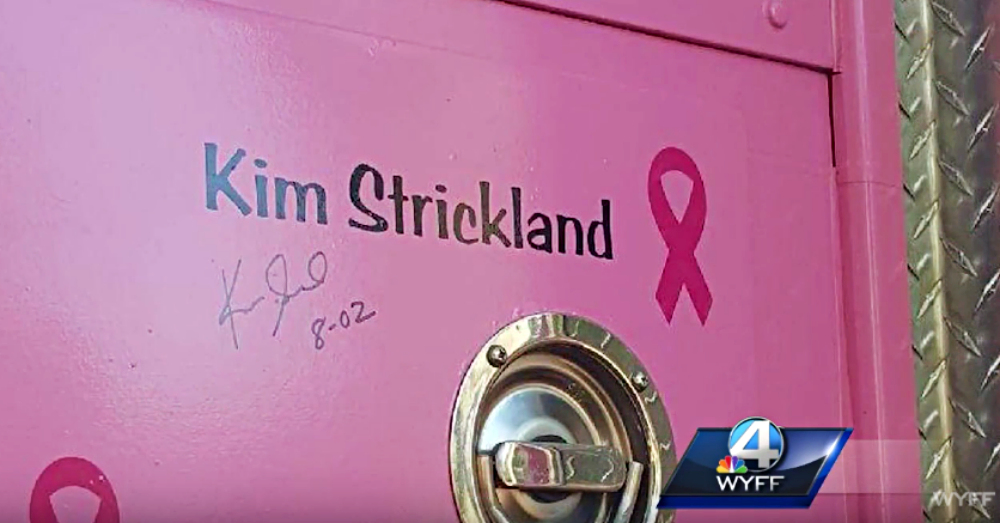 At the Broadway Fire Station, coworkers are family, and Kim’s fellow firefighters thought up a special way to show their support.

“We are a family of firefighters and you treat your family the best way you know how, especially when the times are tough,” Broadway Fire Chief, Randy Bratcher, said. He said that Kim was vital to their team. “She keeps the family together. She is our heartbeat.” 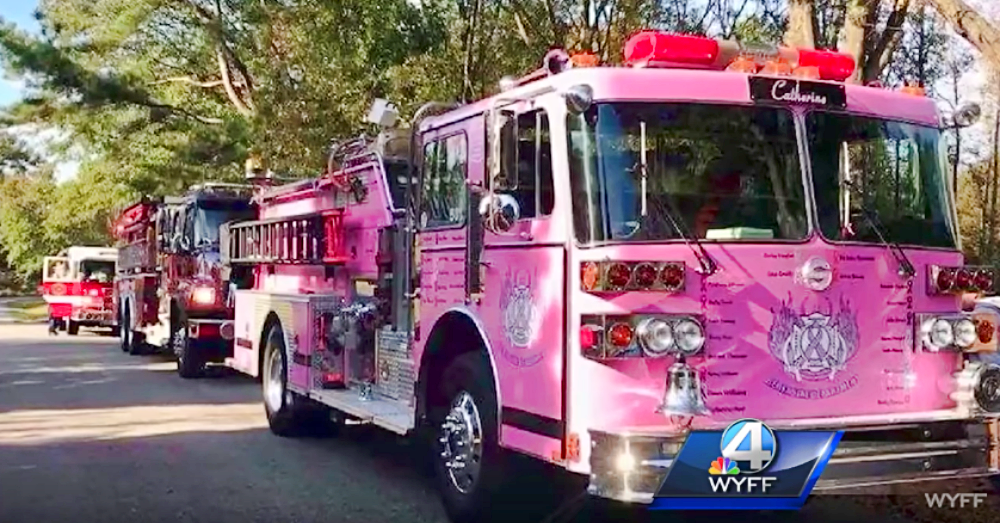 Berea Fire Department, two counties away from Anderson County, had a special truck used to support cancer patients. The engine is retired from fighting fires and has moved on to fighting cancer. When the firefighters at the Berea fire station were contacted by their fellow firefighters at the Broadway Station and told about Kim’s cancer, they knew the truck needed to go on a field trip.

When Kim left the hospital after her surgery, she was greeted by a giant bubblegum-pink firetruck waiting to take her home in style! The truck bears the names and signatures of 43 people who’ve had cancer, and Kim signed her own name before climbing aboard. Her firefighter family also made shirts with the words, In this family… no one fights alone. 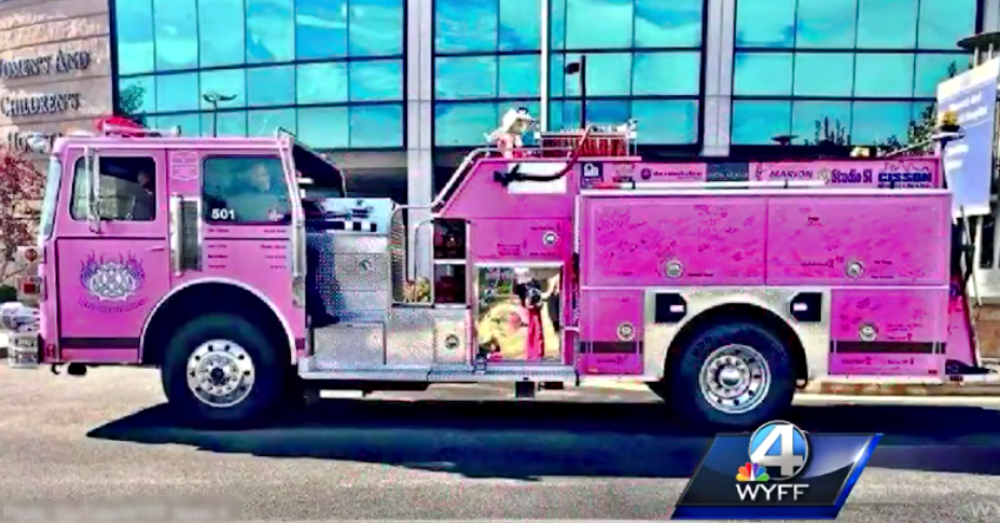 Kim said she was shocked and overwhelmed when she saw the truck. With her name now on the side, she feels like she goes everywhere the truck goes. “I have always known that we have each others backs in hard times,” Kim said. “But I never expected this. I’m so grateful to everyone who has supported me.” 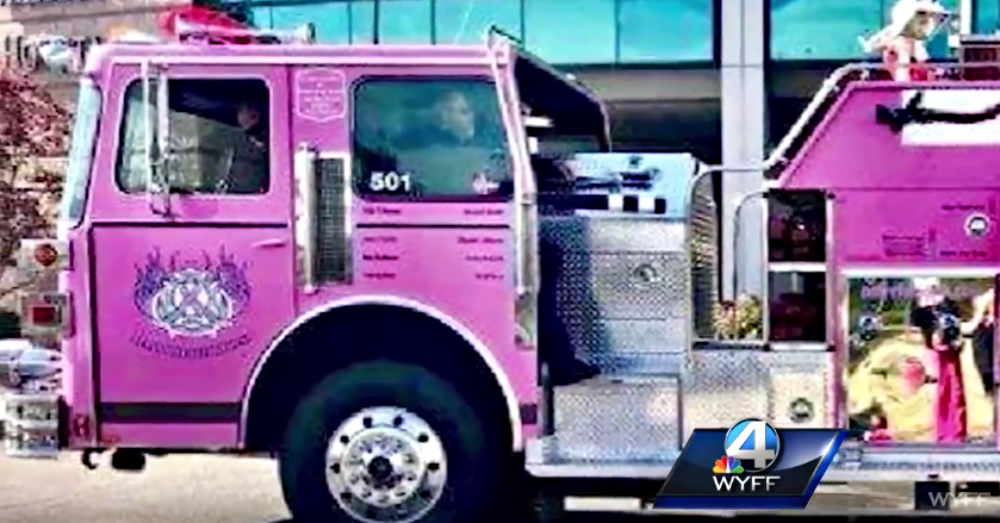 We are so grateful to Kim for her 20 years (so far) of service! Thank you to the firefighters who showed Kim such heartfelt support, and we hope other cancer fighters will be encouraged by their story. Kim, we think you look great in pink!

See Kim take off in her fabulous ride below!