Bell caught more photos as the eagle had the goose in its talons. But before unconditional surrender could be extracted, the goose broke free.

“The eagle went to adjust itself, and the goose’s back end came up,” Bell said. “The eagle was having a hard time keeping the goose down, and he managed to break free.”

The eagle swooped at the goose a few times, and was even later joined by a compatriot, but in this battle the Canada goose would live to fight another day, suffering only a few scratches.

“Nature is not all glory all the time,” Bell posted on Facebook. “Today we had a happy ending to the tale of a goose freeing itself from a hungry Eagle’s talons. Might not be so lucky next time.” 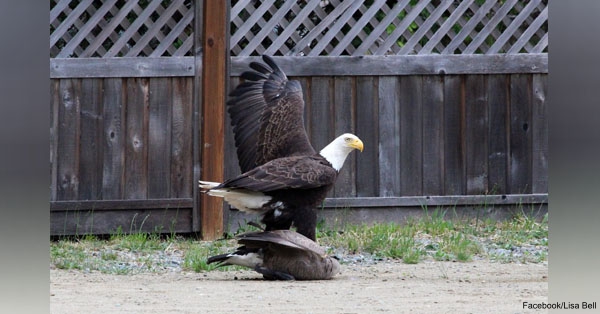 After Bell’s images began gaining visibility on social media, some questioned why she didn’t try to intervene, in lieu of an ornithorial United Nations. Her response echoes that of the embedded journalist.

“That was nature taking its course and there’s not much I can do about it,” she said. “He was hungry. You look at it from the eagle’s point of view and they have babies to feed as well.” 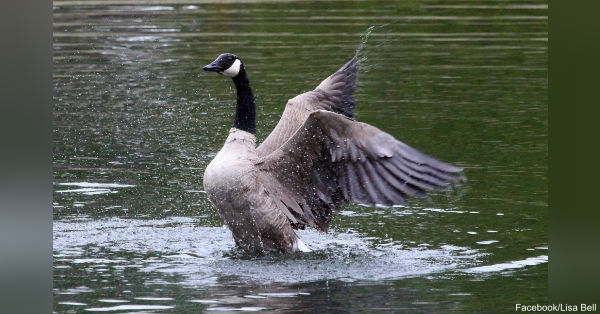 While this battle for supremacy resulted in minimal casualties, across the continent geese in New York have more than just natural prey to content with. Since the “Miracle on the Hudson” airline crash in 2009, USDA Wildlife Services has been regularly slaughtering thousands of geese in New York parks in an ongoing effort to keep them away from major airport locations. Click the button below to sign a petition telling the USDA to take responsibility for their actions and come up with a new plan for geese population control in New York City.